Along Came a Spider...

Mom made it to the doctor yesterday, and of course they said they couldn't give her tamiflu since it's been over 48 hours.  The reason I was upset with them is she called first thing Tuesday morning and told them she had it now too, (my sister was sick first).  In the past, When I lived at home, if one of us got the flu and was diagnosed with it, then if another one of us got sick, we'd call in, tell the doc, and he'd just call in a prescription.  Well She started feeling kinda bad Monday sometime.  Called the minute they opened Tuesday and they didn't call her back until after the office was closed Tuesday evening, and told her she'd need to come in!   So she called the next morning and got the first available appointment, which was 2:30pm.  By that time it was too late to start the Meds!  I know Tamiflu doesn't magically cure it, but it does make it last SIGNIFICANTLY less time and make the symptoms WAY less severe!  I just hate seeing my mom sick, and to know they could have easily made her at least some better frustrates me!

I did a new mani last night and I cannot wait to show you!  I will have to wait until tomorrow though cause I want to get some daylight and hopefully sun pics!  I used my favorite to-die-for Purple again, Sinful Colors "Let's Talk".  I used 2 coats of my China Glaze basecoat, and put my base color on yesterday since I got to work early.  I had to redo a few nails last night prior to doing the konad and nail art, and guess what, STILL STAINED!  This stuff is ridiculous!  Why on why does it have to be such a perfect purple!?!?!  There was soemthign even crazier that happened, but I'll share that tomorrow when you can see for yourself!    I think I will take the fantastic Liz from Iceomatic's Nails and invest in a UV Cured gel overlay!  I found a great deal for the light and for a sanding tool for my acrylics on ebay, so as soon as I have cash, LOOK OUT!

On to today's mani!

I started this mani with 3 coats of Sinful Color's Fiji.  Then went at it with China Glaze "Millennium", using the brush out of one of my Stripe Rite nail art polishes.  After that I added a few spiders  (:::shiver:::) with my black Stripe Rite and the back end of a small paint brush: 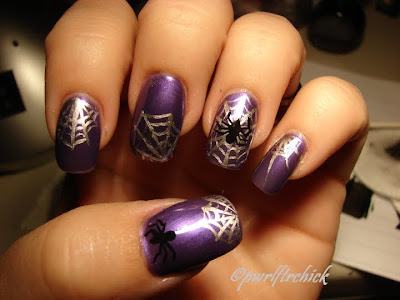 I actually really liked how this turned out!

I love that the purple is almost glowy!

That's all I have for now my lovelies!

I'll be back a little later with some fun pics to share!

Hope your day is SPECTACULAR!

Glad Mom's feeling a little better! Love your mani, the spiders and webs and too cute!

Super cute!! You did a great job on the artwork - two thumbs up!

Tell mom we all hope she is doing better soon!! :)

This is fantastic! Hope your mum feels better :)

Oh yeah, girl! The purple is stunning. I love what you've done with the Millennium, I wish i could free hand like that!

Give mom and sis my best. Sending love to you all!

I am sending healing vibes to Mom!
I love the mani, of coarse I do have thing for spiders!

That's a shame they didn't get her in in time to get that antibiotic! Pfft. But I'm glad she's feeling better, that H1N1 is awful. Tony's just now getting over his cough, and he gets tired pretty easy too. Seems to last forever!
Haha, you are so talented, this is SO freaking cute! LOVE it!

Brooke,
Thank hun, Will do!

Mighty Lambchop,
Thank you so much! I used to be terrible at freehand. Practice practice and practice is whats gotten be better, but MAN those fails are sure hard to get past!

EvilAngel,
Thanks sweets! And it's weird, I HATE spiders (guess that happened when you live in the woods and sometimes take showers with ones the size of your hand, obviously without knowing!) But I like spider stuff! I'm odd!

Nicole,
Yeah Flu sucks! I vote to ban it forever! LOL
And thank you! you are so sweet!

Haha, great minds do think alike! I love this, it is so cute and of course I LOVE the colors you picked!

And may I just say...love, love, LOVE this mani! If I didn't have my own Halloween one planned already, I'd do this!

GildedAngel,
See! I told ya!
Thanks!

Shayla,
Thanks girl!
Can't wait to see yours!

Now that's one brave lady. Afraid of spiders and still manage to do awesome spider web mani. Well done! :)
Sending good vibes to you and your family! :*

Nihrida,
LOL thanks girl!
I appreciate the good vibes!
{{HUG}}

i love this! the spiders are perfect and the combo of purple silver and black is awesome (they were my high school colors haha)! great job and hope things turn out well for you familia. <3

love the spideys and that purple

Glad she's feeling better. I hope she had the flu shot. If not, please get it next year. I get it every year and I haven't gotten the flu. I also get a pnemonia shot every 4 or 5 years. Love your manicure. You do incredible nail art.