Prepare to be overwhelmed with Pics!!!

First of all here are a few pics from the race this weekend:

Remember me telling you about my favorite cars, the Top Fuel Dragsters?  And how they go 0 to 100mph in under 1second, while traveling 60 feet, well I took a pic for you guys just so you could see the distance for yourself.  The green arrow is the start line, you can see the car is just about staged.  By the time they get to the Red arrow, 1 second later, they are going over 100mph!

At night you can see the flames shooting out of the headers!

And a few other interesting cars: 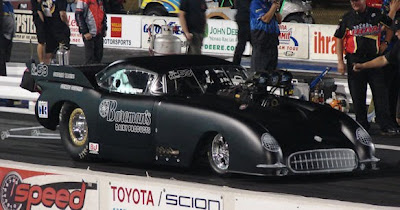 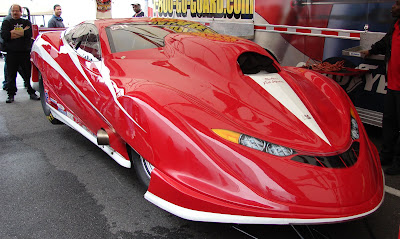 Saturday, as I said, it rained.  So once it was all called off, we went and grabbed early dinner at Captain Billy's, our favorite local seafood place that is AWESOME.  Before heading back to the camper, I asked if we could run into Walgreens, and I decided these babies just HAD to come home with me!

Don't mind the tape,  I dropped the bottle in the store and the cap cracked, so I had to tape it shut! But just look at that HOLO: 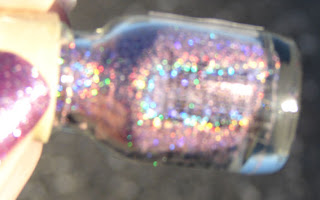 Those glitters will be showing up in some Frankens very soon!

I decided to do a full mani with my new Sinful Colors (I'll add the name later, forgot to write it down) 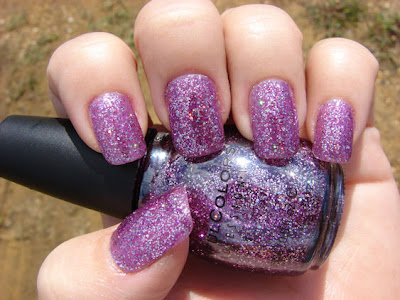 Just Look at that glitter, silver and magenta tiny specks of glitter with bigger holo hex's: 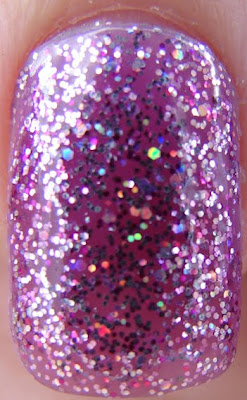 Thursday night, the day before we left,  I ran into Sally's to see if Fortune Teller had come in, they didn't think it had, but know that the Crazy China Glaze woman(that's me) MUST HAVE THEM ALL!!! So they dug around and, look what I brought home: 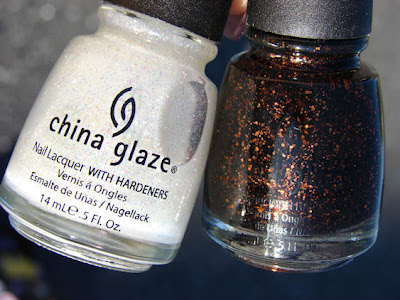 They also has Dreamsicle, but it looked terrible with my skintone.

Yesterday I got in to work to discover I had received my OC Nailart order.

I placed 2 orders for 1 plate each and used the Code "Dusty" to get a free dusty on top of a 25% discount.  It ends 9/30 so run and use it if you like dusties!  And can I just say Kathleen ROCKS!  That girl has superpowers.   I had a tracking number 1hr 20min after placing my order! I will never shop with anyone but her, ever again!

Here are the Dusties I got: 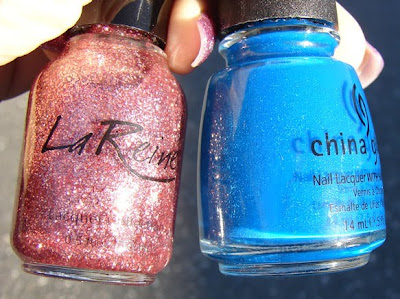 a Pinkish Glitter and Blue Sparrow.  But hey, that Glitter looks familiar... 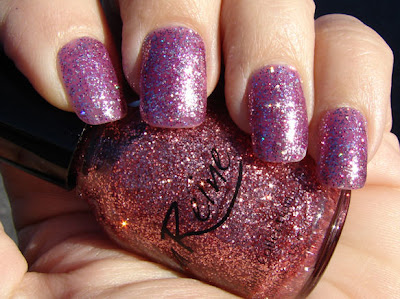 Look how similar!  So since I just bought a near Dupe of that and I have Blue Sparrow already, I'll be stashing these away for a giveaway once I reach 100 Followers!

My Husband is Super talented.  And Super creative.  He makes me jewelry!  Check it out: 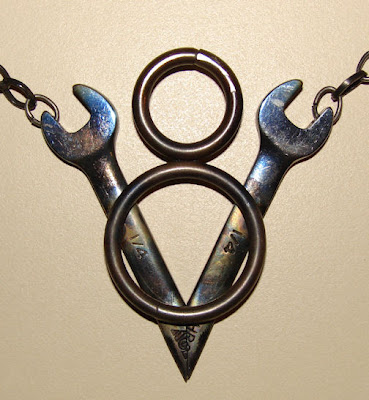 My Kick-Butt V8 necklace!  I've gotten so many compliments on this it's ridiculous!

And I know it looks dingy but I like it discolored like that, it looks more blue/purple in real life.  Like Chrome Headers get after they are super hot! 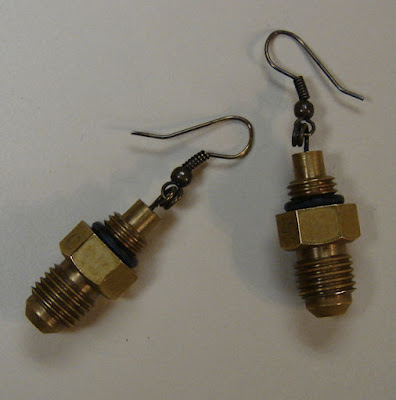 Fuel Injection Nozzles out of an Alcohol-Injected, Blown Hemi.

So I kinda lost my wedding ring, and my engagement ring.  I've looked everywhere.  I'm distraught.  See I was almost 60 pounds heavier when we got married.  So my rings don't fit anymore.  I could have my engagement ring sized, but my band is Titanium with a White Gold stripe in the center.  So while Rob could cut a chunk out and weld it back if it were just Titanium, it would have to get so hot that the Gold would melt!  So I can't have it sized.  So I have been wearing them for over a year with athletic tape wrapped around the underside, and taped together( I swap out the tape once a week minimum).  I have to take it off when I cook or shower because it will get gross and wet and wet stuff against your skin for a long time is never good.  So I took it off at my father in laws Tuesday of last week, to cook.  That's the last time I saw it.

When I went to pick Rob up from work yesterday, (we ride in together, cause we like being around each other, and it saves gas), he had this waiting for me: 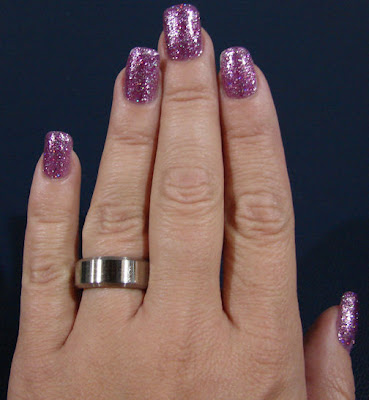 Is that not the sweetest thing ever!  I absolutely love it!  It's nice and chunky, just like I like it!  I like chunky jewelry!  It doesn't say "I'm Married"  it says "I'm Married!!!" I mean seriously, my wedding ring was made by my husband, too cool!

So yeah, he's basically the best ever.

So I'm done assaulting you with pics!  Are your eyes worn out yet?

That's all I have for today ladies!  I will be back to Konading tomorrow, I hope!

Thanks for visiting today, I hope you have a fantastic day!!!

Awesome pics!! Thanks for sharing. How cool he makes jewelry out of unconventional things! i just adore creativity :)

PS. KATHLEEN ROCKS MY WORLD TOO!

I love that necklace! Do you guys sell his jewelry anywhere online?

Brooke,
Thanks! Yeah, he is just so creative. He has a few more ideas up his sleeve hes super excited about!

April and Ashley,
Nope, not as of right now. I'm kinda snobby and almost don't want him too. I want a 1 of a kind! LOL
But I've had so many requests, we may do that one day. If he does I'll let you know!

Great pictures, thank you for sharing the pictures of the jewelery! I love it!

Hey, can you please contact me by email, since I don't see an email listed for you? Thanks

Wow! The jewelry is amazing!!! I love that sinful glitter! I have worn it layered over their dream on polish, it's kind of a neon purple, it's beautiful.

Fantastic pictures! Love all the cars. My favorite time was at night to see all the flames! Your husband is amazing with his jewelry. I hope your rings turn up. How awful to lose them. That's also great that you lost 60 lbs. Congrats! Love all the polish. I'm suprised that the polish was pretty opaque. Not like some of their usual sheers.