Loooooong weekend and a vault pic!

Wow, this weekend sooooooo did NOT go as planed.
Friday was great!  Got to play with a basset hound puppy at the track which pretty much made it an awesome day!  There ain't nothing like getting chewed on by a puppy!
Saturday started good, got to see a few rounds, but of all slower stuff.  Just before the top dragsters were set to come out...here comes the rain.  So we cooked lunch, rain stopped and track drying began.  about 15 minutes before they woulda been done, it started raining again.  This cycle went on 2 more times before they finally called it off for the day!
So rather than leave to come home bright and early Sunday morning, we stayed at the track 'til 5pm so we could actually watch some racing!

We got home alittle after 8pm.  But by the time all the animals were fed, stuff was unpacked, laundry was started and showers were taken (you get pretty grungy at the track!), it was after 10 and I was strugglin'.

So, tomorrow I will have some sweet track pics for you, as well as pics of what I got when we decided to go kill some time during the rain!

But for today I'll pull one outta the vault for ya! (I gotta get to paintin' I'm runnin out of vault pics!!!)

This was a base of an Avon bubble gum pink.  When I went to use it I discovered the cap was defective, so after I managed to get this on, I had to throw the rest of it away.

After the base I used Special Black polish to stamp M57 all over, then added the tip using M19. 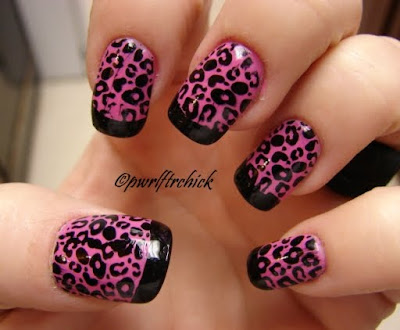 This was back when I was using Poshe Top Coat.  You can see why I switched to Seche.  I got streaking pretty regularly with Poshe.

Well that's all for today.

Thanks for visiting, and have a great day!

That funky mani is so cute!

hi there.. i joined nail art contest.. pls check this site & pls vote for me... heres the link: http://nailarttues.blogspot.com/2009/09/goodbye-summer-peoples-choice-awards.html MY NAIL ART NUMBER ENTRY IS #13.. thanks a lot

Thriszha,
You got it!
Love that design!

Oh, this is super cool! I love it, the black tips just set it off.

This is so pretty and fun! I love it!

That is sexy manicure. My favorite combination of colors is pink and black. Of course my favorite Kondad pattern is animanl prints. At least you have some fun at the track.

KONADomania,
I LOVE your blog, coulda sworn I was a follower, I'll have to figure out what happened there!

Lucy,
Why thank you girlie! My fav is pink and black too! and animal prints as well! LOL

MM,
Thank you so much!