My Husband, The Enabler

So, I had to run into the mall tonight before we went home after work, to grab a few goodies for a special someone, and I decided I'd run into Hot Topic real quick just to look  and see if they have anything new.
BAD IDEA!!!!
Rob saw this: 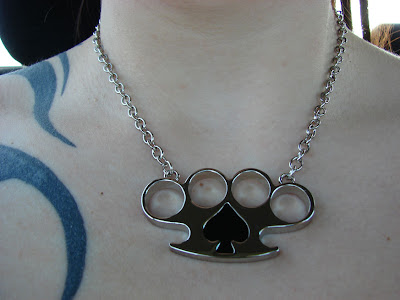 "Hey Baby, check this out...it's even gotta spade on it!(our company logo is a spade)  You GOTTA get it!"
As much as I liked it, I didn't wanna spend the money!  See, I HATE spending money on myself!  I really do, not sure why, I just do.  I don't hesitate to spend on other people, just wont on myself.  (no I'm not trying to pat myself on the back, just speaking the truth.)
Well, I started looking around and found this: 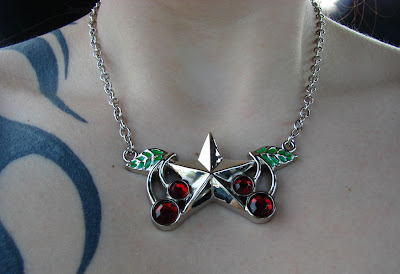 At this point I'm REALLY arguing with myself.
"How often do you find awesome stuff like this, you GOTTA get it!"
"NO!  This is ridiculous, I cannot spend money on something so trivial"
and on and on
Then Rob came over and said "Baby, They got some awesome shoes, you gotta come look"
And they were, they were AWESOME!
Seriously.
Rob kept telling me I HAD to get them, I HAD to get them.
But AHHHH, No Spending MONEY!!!
Then I remembered that rather than  paying a crap ton of money to the IRS this year, we were actually getting money back!  And we were both gonna take a bit of it and spend it on stuff we just wanted that wasn't necessarily in the budget.
So....... 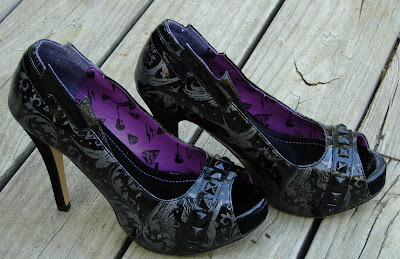 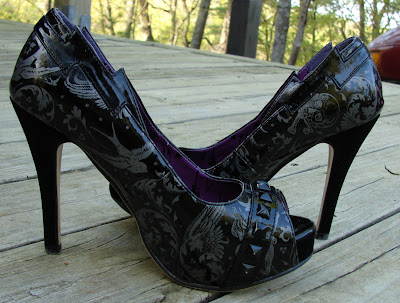 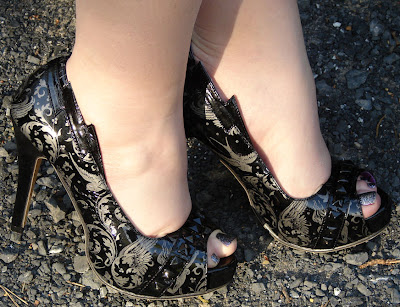 What! I love them! Especially those shoes!

I WAAAAAANT the brass knuckles necklace! A those shoes are the hottness!

OMG! Those shoes are HOT! I think I'm going to have to take a trip to Hot Topic tomorrow!

Those shoes are totally sweet. My husband wants to save every penny we make, and get started redesigning our house. He keeps talking about having a baby. I swear he is worse than a woman.

DUDE the necklace with the cherries is BAD ASS! I need it in my life and I dont even like necklaces. Gah! Rob is the man!

Love everything! I'm the same way about spending money on myself. Good for you for splurging.

SCORE!!! I am so going to Hot Topic tomorrow! By the way, I love your new layout! I seriously gasped when I saw it. Who did you for you?

CRAP, that is awesome!

You made some pretty awesome purchases! Going in to Hot Topic is the same way with me. I never leave without something!

Those shoes are awesome!!

Oooohh Stiletto, that is awesome bad! Which is always good! That Rob is seriously something else, LOL! Those necklaces and that shoes are so you. He's right. And he must love seeing you in these!

I LOVE the first necklace and those shoes are HOT!

Whoa! Shoes are MEGA hot! I wish my hubby could tell me these kind of things at least once a month. lol

I LOVE the shoes, they are so badass! :D
The necklaces are fine, but really not my type (I like girly and weird stuff).

But I think they do suit your personality!
Rob has great taste!

LOOOOOVE those shoes!!!! The necklaces are super cute too. So sweet that Rob goes shopping with you :)

Oooh, I love those shoes!!! My little sister would really love them too..

By the way, I tagged you for an award
http://tiersthoughts.blogspot.com/2010/04/blog-award.html
[:

OMG, I freaking love those shoes!
The necklaces are super hot especially the star and cherries. I'm such a sucker for cherry prints and design.

WOW! Sweetie, those are just fantastic and so you!!! Yep, Rob is the best! You deserve the best!! And I am so glad you splurged on yourself a little!

The shoes are so SICK! Fierce!

You know I love that cherry necklace. I love the cherry set you made for me! I always get compliments on it. I think I'll have to do a little lookie online. Those shoes are fierce and got with your new moniker! Mwah!

Ooooo I so want the first necklace. My hubby's command is the Black Aces. I love those shoes too. You have a wonderful enabler, I mean um hubby.

Ooooo I so want the first necklace. My hubby's command is the Black Aces. I love those shoes too. You have a wonderful enabler, I mean um hubby.

Those are HOT shoes! I need myself a Hot Topic in Canada!