Today's mani I did to look like Easter eggs!  The accent nail was Rob's idea, and I like it!

Not sure how to explain this, since with the exception of two little details everything was either dotted on or painted on with a paintbrush.  So I will simply list the polishes I used, and then show you the nails, then go over the two little things I did differently.

I started with a base of Sally Hansen Insta-Dri in "Whirlwind White".  Yes, Again....It's the only white I have found so far that is smooth in 1 or 2 coats and not streaky.  And I LOVE the big brush!

Then the rest of the colors are as follows:

Yellow: China Glaze "Lemon Fizz"
Pink: Color Club "She's So Glam"
Purple: Franken, I just lightened a darker purple with white, any pastelish purple will do.
Blue: Franken, again.  But any light blue will do.
Green: Yup, another franken.  I simply lightened Pure Ice "Wild Thing" with a white polish. 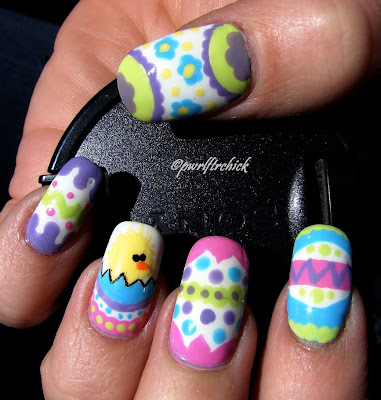 The colors in the picture are ever so slightly darker/brighter than they actually were.  The picture, straight out of the camera was WAY too light, the direct sun made it so light and washed out, you couldn't see any of the details.  I darkened it up a bit in Photoshop, but it came out just a touch too dark and bright.  Imagine the colors a touch more pastel and you'd be right on the money!
Ok...the 2 exceptions to the freehand and dotting.
Thumb:
In order to get a nice crisp line with a fluted edge, I just laid down a hole reinforcement on the base and tip of the nail.  Then I dotted on the purple so that the center of the dot was right over the edge of the hole reinforcement.  Then, as soon as I was done with the dotting, I took off the reinforcement immediately, so it would come off clean.  then I just painted in the area that was left.
Ring Finger:
I cut a jagged edge on a piece of masking tape, using cuticle scissors.  Then just made a big dot for the chick's body.  Then I used a thin brush to pull the color out to make him fluffy!  I intended to put the tape on, then paint the background blue so he'd show up better, but forgot until I had already made him fluffy, and just didn't have it in me to redo it.  So you may wanna do that yourself, if you do a look like this, so his fluffiness shows up better!

Here's a color accurate shot of all the colors I used! 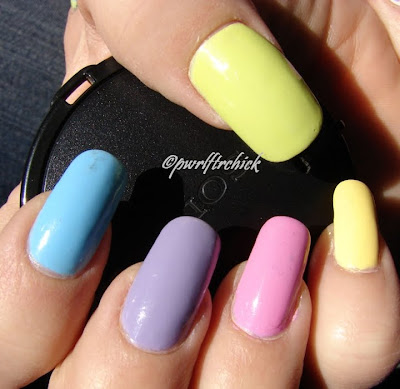 That's it for today everyone!  Tomorrow's mani will be a touch more subdued and will be in celebration of Good Friday and the wonderful gift Easter represents!
I hope you all have a fantastic day!
{{{HUGS}}}
Christy
Posted by Stiletto at 8:33 AM

Really cute, I love these colors together!

All these cute Easter manis are KILLING me!

Love this that little chick is too cute!♥

This is REALLY, REALLY awesome Christy!! It is 100% Easter and so cute :) Seeing this mani really gets me in the Easter spirit :) Thanks for sharing this - it is really fabulous!!

Amazing job! I think my favorites are the chick and your thumb. The Easter background is drop dead gorgeous too!

This is so cute and creative. Love it!! That purple is what I have been looking for and phooey I see it can't be bought.

Awwwww the little chick is too cute!

This is so pretty! I love especially the thumb ;)

These are the cutest! I love the little chickie!

Probably the most ornate mani I've seen you do! I love the chick,it's so cute!

Those are so sweet! I would have a really hard time taking them off!
And Yeah! He is risen!
~Sylvia

so very, very cute! if only i had that much patience!

Too gosh darn cute! I love the chick!

I LOVE this mani! It just makes me smile. That's talent my dear.

Love the Easter egg manicure and the little chick is so cute. The pastels are also adorable. Love your manicures.