First...My GIVEAWAY ends tonight at Midnight eastern time, so if you have not entered, do it...NOW!!!

Now, on to the coolness that happened Tuesday!

This actually may not be exciting for some people, so if it's not for you, I'm sorry!  I guess little things make me happy!

Tuesday, my Father-in-Law was hanging out at the shop where my husband works.  He left and wasn't gone 5 minutes when he called Rob and said that there was something in a feild beside the road, and that Rob should jump in the car and go look, but to hurry.

Rob grabbed the camera and was out the door and down the road.  Luckily it isn't a SUPER busy road, so he pulled off as far as he could, put the flashers on, and started snapping pics.   What did he see you may ask...... 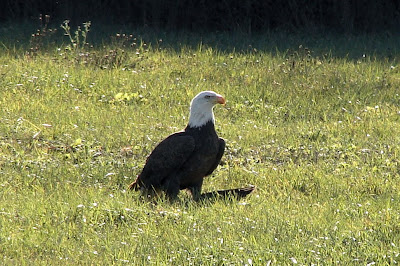 Apparently this guy either found lunch or caught lunch!

How awesome is that!

I have never seen a Bald Eagle in real life!

I'm so sad that I couldn't see it! 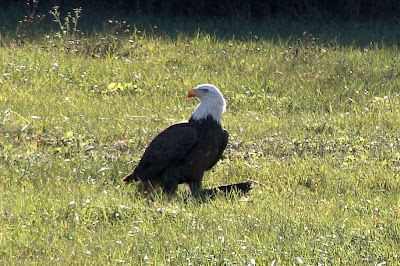 Then something caught his eye as he watched the Eagle..... 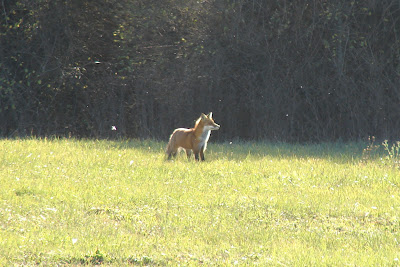 Apparently the Eagle's lunch smelled really good, and the Fox was looking to share!

Rob watched as the Fox got low and snuck in like a cat.

(I have only ever seen a Fox as an orange streak as it ran across the road ahead of us.  So I've never seen one just there, standing to be admired!)

Just when the Fox got close enough for Rob to snap a pic with both of them in the same shot, the Eagle caught a whiff of the Fox and took off to a nearby tree, and the Fox hightailed it back to the edge of the woods in the background. 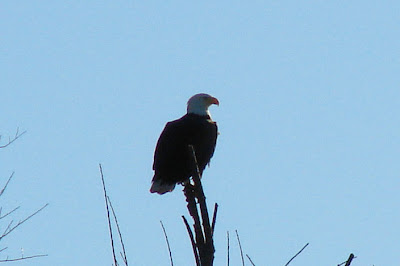 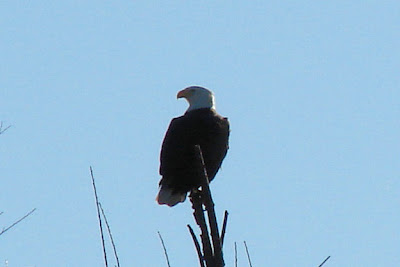 They both held their ground so long that Rob finally gave up and headed back to work!

How awesome is that!  Oh how I wish he could have managed to hit the button before they took off!

Monday, after reading Brooke's post about Color Club at Ross, we ran over there on our way home. 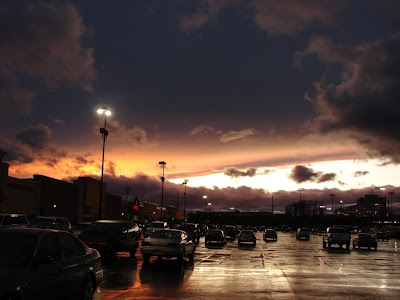 How gorgeous is that?!?!

Well ladies, I certainly hope you all have a marvelous weekend!

I am going to Video the drawing cause I thought it might be fun for you guys to see a more live and in living color me!

wow, gorgeous pictures! hope u got my email for giveaway:) You don't answer each one, do you?

PS Why is fox the wild animal? I'd like to have it as a home pet. :) Especially after watching "Helen the baby fox". This movie made me cry (the story is so touching).

How cool is that??? I've never seen a fox for real either. Rob snapped some great photos. Thanks for sharing them with us!

Those are awesome pics of the eagle. I saw one for the first time with my mom a few weeks ago, when we went to a nearby lake hunting for catnip before it snows for real, but it was so far away - across the lake - I didn't get any good shots. But it was so distinctive with it's white head & tail, it would perch in a tree & then swoop down over the lake, looking for fish! We watched for about half an hour before we got too cold & had to go back to the car.

I love all of the pictures. They gave me goose bumps! I'm fascinated by nature and photography. I wish I could just go take pictures all day!!

Thank you for sharing those gorgeous pics with us! I've seen foxes in RL but I've never seen an eagle! Rob was really lucky to be able to take those pics.
steph.

Awwww, am I the only one who thinks that foxes are cute?

Christy- Thank You for sharing! It reminds me of home. Rob should go check the field and area around to see if the Eagle left you a gift. An Eagle feather left is a great spiritual gift!

The last picture so makes me miss USA. :(
Beside those animal pictures are great! There no creatures like this in my area!

Such beautiful pictures...thanks so much for sharing!

WOW
these photos are amazing!
i cant wait to hear who wins the giveaway!

wow the eagle! In the Netherlands we don't have them, but a fox lives in the forest near by.

Have a greet weekend, we have Sinterklaas this weekend!

Love the pics! I have had one time a Hawk bathing in my birth-bath!! ^_^ these wild animals are amazing!!!

These are great photos! Congrats on finding goodies at Ross! I found the Musique and Glitter Vixen collections a while ago, but I only bought the Glitter since I had some of the musique! Anyway, love the pics thanks!

That fox is the cutest thing! Ginger <3s

How wonderful to be able to see both animals! It's a blessing when you get to see a wild animal. Shame you weren't able to see them. Glad Rob took all of those pictures. Thanks so much for sharing them. Beautiful sky. Nature is so beautiful. God did a really good job!