Today I have my Memorial Day Tribute Mani to show you!

The explanation part of this is a bit complicated, so bear with me while I try to explain the process I went through to achieve these nails.


Here are the supplies I used for all but the ring fingers. 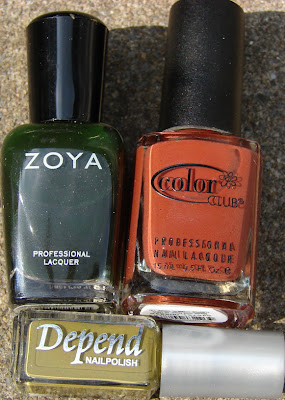 I began with 2 coats of the Depend polish, which sadly I can't give you a number for.  I have no clue where to locate it on the bottle.
Then I broke out my Konad and used plate M62, the cow pattern.
First, using Color Club "Charity Ball" and stamping the pattern the way you normally would.
Then, using Zoya "Envy", I turned the stamp, so that the length of the stamp ran across the nail, rather than down the length.  This resulted in having to double stamp the image, which as you can see in the pictures, is quite easy with this design.
And viola ... Camo!
Now, for the Ring finger/ accent nail!
First I applies 1 coat of Sally Hansen Insta-Dri "Whirlwind White", my old standby!
Then I taped off a diagonal tip using masking tape.
Next I broke out my Bundle Monster plates and used the striped image from BM20 to stamp stripes on the lower half, using Konad special polish in Wine.
As you will see, I have not yet mastered the Bundle Monster plates!
Next, I took off the tape and painted the tips with China Glaze "Frostbite".
Finally I fished some star glitters out of Claire's Starstruck and stuck them on the tips.
Top it off with a coat of Seche and: 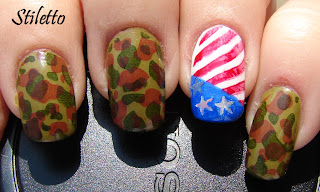 Now... If you're like me, shiny Camo is just WRONG!  So, I added Essie Matte About You: 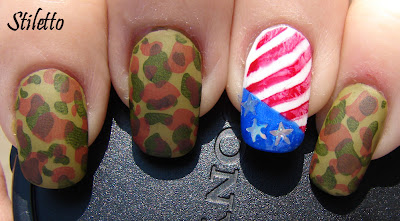 Much better!
You can't tell from the pic, but I left the ring finger shiny.
NOW...It took a bit to figure out the camo, First I used Color Club "High Society"

instead of "Charity Ball", but it was too transparent.
I did however, mix "High Society" with "Charity Ball" and rather liked the outcome.  So here is a comparison for ya,just so you know you have options: 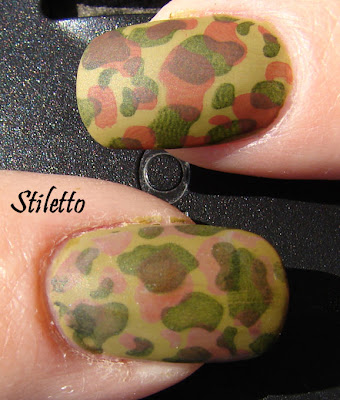 How creative!! That is so clever. Now to try and dupe it with snow camo and with some pink...you got me thinking....

I always look forward to seeing what you'll come up next with. :)

Oh, man that is creative!! I love it. Great job!

i absolutely LOVE it!! what a great tribute!

This is so cool, I LOVE the camo!!

great idea! I'm going to show this to my friend at work that LOVES camo!

I just found your blog and I'm in love - your nail designs are so creative, inspirational and fun! I can't wait for my nails to grow long and strong again, because atm I'm stuck with .. nothing, really :))
Your style is great - I also love your makeup posts :))

this is effing awesome! I'd never have thought to make camo like that!

WOW, what a great idea! I *never* would have thought to do this. You're so creative :)

Very creative! And it looks amazing!!

This is SO awesome, I just love how it came out! I have to agree with you about the matte camo, it's perfect that way!

Great idea! I love how this turned out. :)

Completely awesome! My favorite Memorial Day manicure - you really captured the spirit and the meaning.

I adore this manicure. Love how the camo came out. A wonderful tribute manicure. Your so amazingly talented with your different looks.