***Update   I am making an concerted effort to respond to comments again, so be sure to check back, after you leave a comment!  I'm tryin guys!*****

First of all I wanna reveal what I was talking about Friday...My hair.
I have been trying to get it a certain color without doing too much damage, and this time it came the closest it's been yet!  I used Color Oops to strip out the old dark color so this would show up better.  Next time I dye it, which will be in May, before heading to the Cruise-In we always go to, It will probably be much brighter.  I'm trying to ease my boss into it!  So, here is the new color! 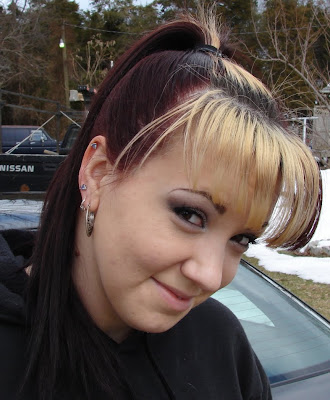 Please excuse the terrible expression and the roots that are in desperate need of bleaching!
I'll get a better shot in full sun today or tomorrow!
Next I just want to comment on how obnoxiously sweet Shayla of Reve-Noir is!  A while back she posted her look of the day picture and also showed us all her new necklace.  Well I about flipped out!  It was the greatest thing EVER!  I HAD to have one in my life!  I asked her if she could tell me where the girl that got it for her got it from.  I forgot to check back and see her response.  A good while went by and she emailed me and asked for my address.  Said she had a little something, nothing major.  What did I receive Thursday which prompted me to coordinate a whole outfit and makeup look with it? 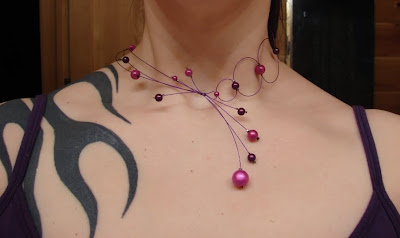 How absolutely AWESOME is this?!?!
I got so many comments!
And yes, like a big dork I totally forgot to take a picture of the whole outfit and makeup look I did to match.  GRRRR.  Nothing like early senility!
So THANK YOU SHAYLA!!!!

You are such a sweetheart!
Finally, Since I don't feel like I have enough to entertain you all, I thought I'd share 2 cute pics of our baby Nakita.  Nakita passed away very unexpectedly abotu a year ago, the night after knee surgery.  We declined an autopsy, cause really, what was the point?   Knowing what killed her wasn't going to change our heart ache or anything for that matter.  She had the symptoms of twisted stomach, which is odd considering she had been sedated since some time that morning and was far too woozy and in pain after the surgery to move around.  Docs best guess was blood clot.  But who knows.  ANYWAY....since I am always showing you guys pics of Macy, I thought you'd like to see one of our other babies, even if she isn't with us anymore.
Nakita on our porch 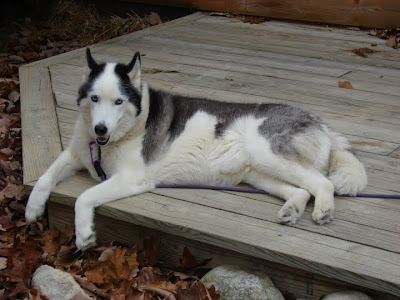 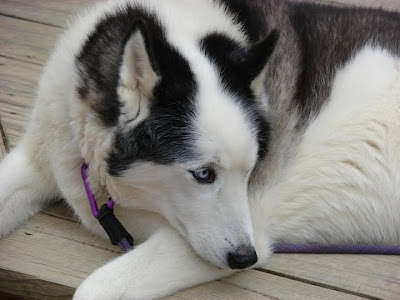 She was a AKC registered Husky.  I swear she had wolf in her though!
She would always get super restless when there was a full moon.
She loved to howl whenever she heard sirens, it was too cute.  She would just howl right along with them, so in tune it was hard to tell which was which!
She was also the biggest husky I've ever seen!  Husky's are typically 50 to 60 pounds.  She was SUPER long, and weighted close to 80 pounds, and was still lean(the tummy you see int he first pic is all fur)!
To end on a happier note, I just gotta gush about Rob(that's my hubby for you newer readers)!
Rob came to pick me up from work Friday and had a little twinkle in his eye.  He let me blab on about my day, and then reached into the little "pocket" in the car door and handed me something...POLISH!  He had to run to Rite-aid to grab some poster-board to use as a template for some metal pieces he was fabricating and checked out the polish and got me some!  He confirmed I didn't have it yet (we were both shocked), and handed me another!  Then informed me Rite-aid had NYC polish buy one get the second for a penny, and handed me a third!  How cute it is that he goes polish shopping for me!?!
Ok, enough babbling for one day!
I hope you all have a fantastic day!
{{{Hugs}}}
Christy
Posted by Stiletto at 3:18 PM

Dude, youre so cute! Hmmph!
Wow, she was a gorgeous dog. A beauty. I want one but this Georgia heat would probably make it miserable.
ALso Your husband rocks

Oh, are you trying for real true red? Because that would be SO freaking hot! I have always wanted that too. Looks good at this stage! I love it.
That necklace is SO hot, I'm just going to have to imagine what kind of cuteness you wore for an outfit and your makeup. If it was hot pink e/s, I bet it looked fantastic! How sweet of her.
Nakita, she was a beauty. I looove Huskies, they're gorgeous, and they're whip smart, too. She does have that wolf look - I have a friend who has a pure wolf, and she's got a bit of that look about her, especially around the nose! What a gorgeous thing. *hugs* I bet it still hurts your heart. I think that we pet owners can all relate.
Aww, your hubby is awesome! Haha! Got you three polishes. ;)

It's so nice to hear ladies say good things about guys! There are LOTS of good ones out there!

Awww, your hubby is so sweet!

Scandalous,
Isn't it though! He's a sweetie! I think I'll keep him!

L,
AWWW Thanks hun!
She was a very pretty girl! YEah they LOVE snow! She would beg to go out and lay belly down in it!

Nicole,
Yes Ma'am! Cherry red but a touch darker so the boss doesnt have an aneurysm!
Pink lids with a purple crease for the eyes and pink lips! Purple tank with a black dress shirt over it. It was AWESOME!
She was SUPER smart!

April and Ashley,
AMEN! My first was a total loser, but this one has more than made up for it!

Gilded Angel,
Thanks hun, and I agree!

I love everything about this post. Everything. Your Hubby rocks, Your hair is super cute, that necklace is amazing and that is one gorgeous doggy. I enjoyed reading your post today, it's like I got to know a little more about you and you're really cool and super blessed.
I finally just gave my hubby a list of polish he can get for me instead of flowers. LOL...not that I don't love getting flowers - he always delivers them himself too, but some polish is way less $$ than flowers and $$ is tight right now. :)

Elizabeth,
AWWW Thanks hun! Your a sweetheart!

That whole polishes instead of flowers is GENIUS! LOVE IT! And how sweet that he brings you flowers! You have a winner too, I see!

I agree with Elizabeth :) Your hair is great...wait not just your hair :) the necklase is perfect, I love it. And your hubby is so sweet.

I totally need the link to buy one of those necklaces! That thing is gorgeous! Your puppy is adorable :)

I LOOOOOOOOOOVE your hair!

Your hair looks great! I love the necklace, and your late puppy was beautiful! I try to get my hubby to bring me polish (hell, even flowers!) but he never thinks of that stuff... Every now and then he does bring me a Soap Opera Digest, so I guess he tries! LOL!!

Love your hair color and that necklace looks great on you! =)
Thanks for posting photos of Nakita! She looks adorable.

That necklace is insane! So beautiful. So simple, yet it draws attention immediately! Very unique! Do you have any idea where she got it from? Simply gorgeous!

Everything in this post is so interesting to me (now I am revealing myself to be a total stalker!).
Hair: you rock it! That's a lovely look on you, I'd love to see the how it all ends up finally.
Necklace: So so cute. Yes, definitely do the outfit again and take pictures!!!
Nakita: Handsome husky! I have a toy poodle given to me and she is has given me so much comfort during my crisis. Nothing like canine family members to lick tears away.
And Rob: guy's totally a keeper. You found your match -- heaven sent, as you are for him!

Hi Christy! I am wondering about the flakie glitter you sent Sasha (Nihrida), is it also called Opalina glitter? Could it be found at craft stores maybe? Thanks in advance! Michelle

PS: One day, while reading your blog, my mother walked past and glanced at the screen. She said "Wow he has gorgeous eyes!" pointing at a picture you put up of your husband. My Mom gave me strict instructions to pass on a message: "If you ever write to her, tell her your mother thinks her husband has gorgeous eyes!"
Message delivered, ha ha ha!

Love your hair color. You look adorable. Rob is one sweetheart of a husband. I love your necklace. Just beautiful. I bet you could make one yourself. I know I love my cherry necklace that you made me. With matching earrings that I adore. (((big hugs))). Your poor dog. I feel so bad when I read about that. I've watched animal planet and there's always that danger of the twisted stomach. Such a horrible thing to happen.

I love your hair color, and it will be great in cherry red !
Rob is a sweetie to get polish for you ^^

Love the pic of the Husky - very pretty.

i LOVE that necklace!!! looks amazing on you!