Arnold Expo in Photos...Lots and Lots of Photos!

We had such an awesome time at the Arnold!

I'm gonna split all the pictures up into 3 days...yes, I took a TON!

Today I'll show you the Expo!
Tomorrow, the mani I sported and some cool pics of the ride there.
And Wednesday I'll share my haul!

First....Let's clear up some facts about this weekend.
There were 18,000 Athletes participating in the sports festival.  PARTICIPATING!  That's insane!  That's almost 3.5 times the athletes that they Olympics had!
They don't have the official attendance number yet, but I can tell you there were SIGNIFICANTLY more people there this year than last year, and last year they had over 130,000 in attendance!

Ok...On to the Pics(which you will have to excuse the quality of...zoomed way in and people moving made for blurry pics!)!


There were LOTS of famous Faces:

Randy Couture, Lou Ferrigno, Arnold Schwarzenegger, and Sylvester Stallone
Lou is nice and clear cause I was all of 2 feet away when I took his pic!
Check out the Crowd : 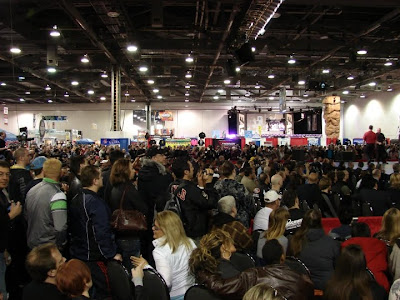 (this pic shows about a 16th of the space of the main expo hall)
Yes, even a Rock Wall:

There was Arm Wrestling: 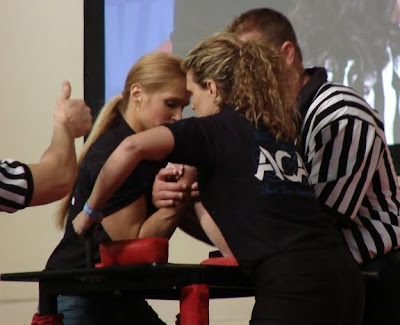 Check out the arms on the girl on the left!
AWESOME!  That's what I will look like some day!
There was a Deadlift Competition too: 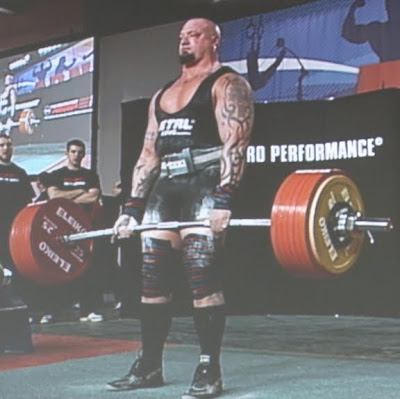 Can't remember his name (sorry dude!)
But this guy ROCKS!  He's a bike builder, and competes in the deadlift comp every year!
Here he's lifting 805lbs!!!
Love the tatts! 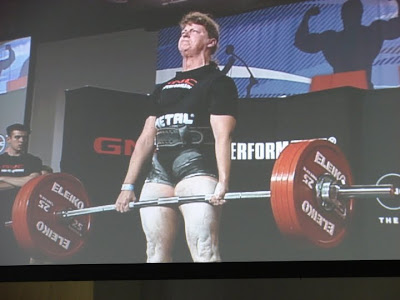 Yes I am terrible, I can't remember her name either!
She is in the weight class I would compete in!
Here she's lifting alittle over 500lbs! (can't remember exactly!)
Here's the Pro Figure Competitors: 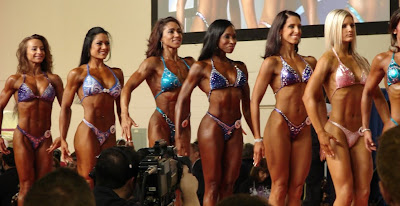 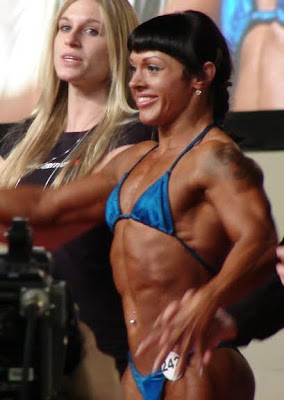 She is so cute!

This chick was massive!
She has the physique of a Pro!
Funny thing was the smallest amateur male bodybuilders came out right after her and the difference was hysterical!  She looked better than every one of them!
Who wants to see the Amateur Male Body Builders?
Here's a sampling: 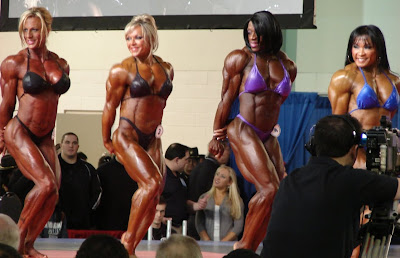 Iris, the girl in the Purple suit won yet again! 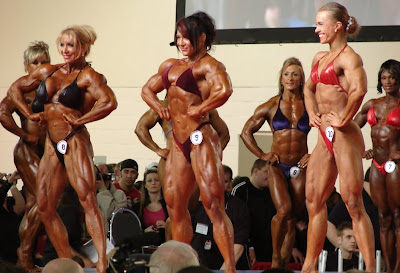 Look at the difference in the three up front!
The middle girl was my favorite!
Here's a few more of her: 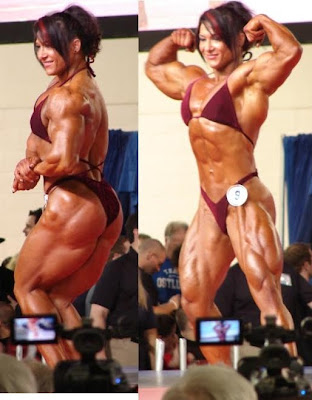 Whether you want to look like that or not,
you gotta admire the work and dedication it takes to look like this!
And for those who don't know, no they don't look like this all the time, they are much smoother and less "ripped" off season and in between contests.
Ok...ready for my Fav's?
There were many Strongmen Competitors.
Sadly I didn't get pics of everyone, But here are a few pics of the various lifts and a few of my favs
(didn't even get all my favs)
First Lift was the Manhood Stones: 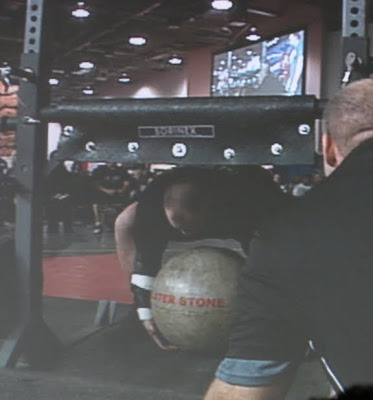 (had to take a pic of the screen, stupid pro photographers kept getting in my way!  The nerve!)
In this lift, they had to pick up the stone (533 pounds or 452 pounds) and lift it over the barrier as many times as possible in 90 seconds.
Apollon's Wheel:
Starts off as 366lbs, but has weight added progressively.
This is particularly hard due to the fact that the wheels and bar are one solid unit, so as the competitor 'cleans' it up to his shoulders, the wheels want to spin, causing the whole bar to spin in his hands, really making a grip next to impossible 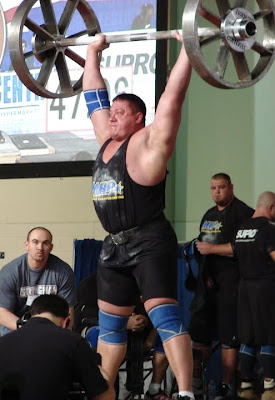 This is Mikhail Koklyaev of Russia.
I just love this guy!  I call him "Happy Guy", cause if he's not actually lifting a weight, he's smiling!  You can't help but love him! 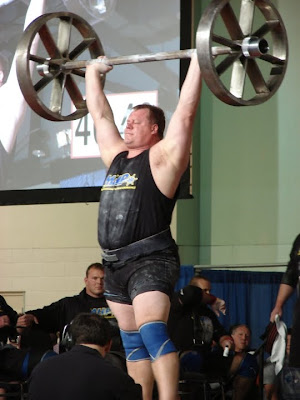 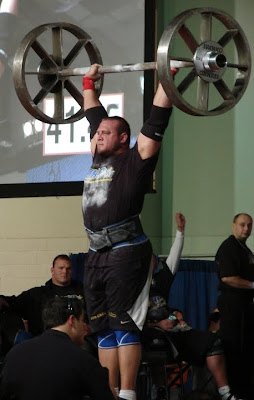 Travis Ortmayer
Watch out for this guy, he's significantly better every year and I bet will be a major player in Worlds Strongest Man in the next year or two.  Cute story about him though...he met his wife at the Arnold on 2006, got married right before it in 08 and had his son born 1 day after it last year!  He seems like a total sweetheart!
Circus Dumbbell
228lb dumbbell with a handle that is bigger than a coke can!
Must be lifted overhead as many times as possible in a time period.  Can only use 1 hand to get it from the shoulder to a lockout position. 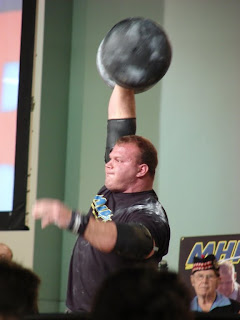 This is Derek Poundstone.
Won the whole thing for the second year in a row!
Also won runner-up int he Worlds Strongest Man!
Yet another to keep an eye one!
He too get's better every year!
Hummer Deadlift:
Yes, those are hummer wheels and tires on a bar! 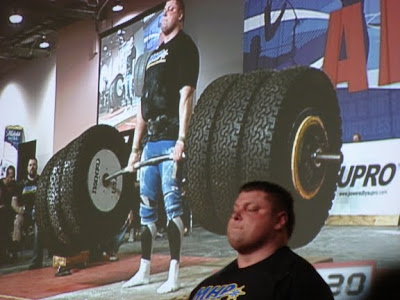 Zydrunas Savickas
The strongest man in history...seriously!
He has broken every record and has been named by many in the know strongman historians to be the strongest man to ever walk the planet!
Here he's deadlifting a record breaking 1027lbs.
And yes, he came up like it was a warm up set for him!

And I just had to show you this guy!
David Webster, renowned Scottish strongman historian.
But I guess I didn't have to tell you he was Scottish did I?
It's he AWESOME?
Well that is finally it for today my wonderful readers!
I hope you enjoyed the recap!
Have a great day!
{{{Hugs}}}
Christy
Posted by Stiletto at 2:32 PM

Awesome!!! Can't wait to see the next days pics too!

OMG!!! So cool! I used to be a huge fan of Strongmen a while back! :) Zydrunas Savickas is our national (Lithuanian) hero. :)

I nominated you for Best Blog Award...I tried to make sure you weren't nominated already....sorry if you were
check it out here:
http://polishandkonad.blogspot.com/2010/03/tagged-for-best-blog-award.html

B/fs brother does body building and a couple other of their close friends, its amazing how much work they go through to get ready and then how much more goes into it before a competition. Way more patience and dedication than I could ever have.

I like the strongmen, but those bodybuilders...I just don't see the beauty in it. Or health. And that Iris girl...I think she might be a dude.

That is so cool! I bet you guy's had a blast!

Thanks for the insider's peek into a world I know little about! I love it!

Looks you had an awesome time. I haven't seen any bodybuilding in awhile. I used to watch it all the time. I watched when Arnold was competing. Arnold and his friend whose name I can't remember. I know he was Italian and smaller than Arnold. I also watch the Strongman Competiition when I run across it. I wasn't crazy about the women's competition at first. I really learned to enjoy their physiques. I just can't imagine all the work they have to do. Must be very little fat in their diets before competition. Otherwise all the definition wouldn't show. I really admire all the work and dedication in the sport. Women didn't do that when I was young. I would have loved to do, powerlifting that is. I was always pretty strong. Damn what a fun time you must've had. Thanks for sharing the photos.

Another thing I love about the blogging community is that whole new worlds open up to me all the time -- things I never knew about, that I couldn't conceive of even existing. Like this competition. I've been vaguely aware of body building before, but this information you shared is awesome. And the great interest (passion?) you have for it is contagious. I find myself getting curious, interested even. Thanks for sharing!