Hair, Vacation and Me on TV!

Hey guys!  I got LOTS to share with ya!
First of all... Wanna see a pic of me looking drugged and puffy, sporting my new hair?  LOL   It was way early when this pic was taken and I'm all weird lookin!  LOL 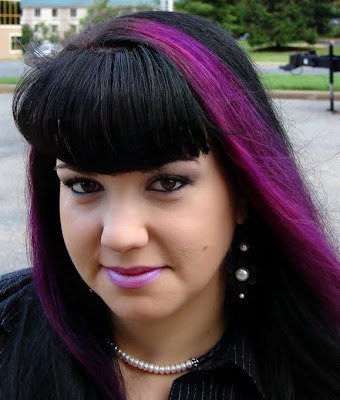 Love the hair, Enjoy your vacation and break from blogging and that is awesome and about Pinks ALL OUT, my hubs loves that show.

Love the hair. Have fun on vacation and I already set my DVR!

How exciting about the race! Hope you do make it on TV. I have to write this down so I won't forget to watch. Love the hair. I'd love all of my hair the color of your streak. You look fantastic. Enjoy your vacation break. Be safe and have fun.

Your hair looks amazing, I love it!

Have a great vacation, enjoy yourself to the max and just relax!

Yay for the interview and hopefully getting on tv! I'm sure you look beautiful :)

I love your hair!! And I am digging your name sake lippy as well. So pretty.
Your pic is lovely.
Did you know that one of the reasons we're usually not fond of our photos is because they are not a mirror image (what we're used to seeing?) Try it, flip the photo and you may like it better. I see nothing wrong with it!

Love the hair! What color did you use?

Your hair is gorgeous! Enjoy your vacation :)

So beautiful you are! The hair looks lovely! Have a great vacation, relax and enjoy the time with your love :)

Oh my gosh, your hair is made of awesome! This is so hot on you. And you don't look puffy and weird, stop that, you look gorgeous!
Have a blast on vacation! Can't wait to hear all about it!
Too cool, I want to see you on TV!

I really like your hair, and yoor eye make up is also perfect! Lovely picture. Can't wait to check the link where we can see you on tv

love the hair. have fun on your vaca (:

Love the hair and congrats on the cameo! Sweet! Love the new color!

Omg, I'm in love with your hair! And think that lipstick looks awesome with it!

I can't wait to go darker myself in the fall...

Hai Our hair matches! (In colors not design)
You look gorgeous as always!

Hey. Could you do me a favour please? Follow my blogs:

You dont understand how much it would mean to me! I'd love it if you would :]
Thanks,
Leah

Loving the hair and i adore the lips!

I love that colour! I miss my hot pink highlights...definitely going to be adding them soon!