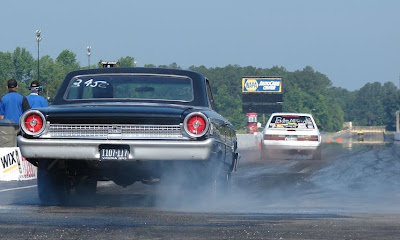 The Galaxie doin a burnout before heading down the track!
This weekend was just ridiculous!
First let me say that it was H.O.T.!!!
Temp was in the 90's but factor in all the cars, the asphalt and the crazy humidity, and the heat index was over 100!
The actual track temperature was over 140 degrees!  Once it hits 150 they cant race cause that much heat brings oils to the surface and then your just asking for trouble!
We started out Friday with a test and tune!  The first pass down the track was SLOW!  we were all so frustrated!  Then we realized that we hadn't fixed the timing from when it was just cruisin so we fixed that shot it with a bit of nitrous and OH YEAH!  it gained over 2 seconds!  WOOHOOO!
Most might not consider 11.60's to be fast, but it's all steel, and has street legal tires on it, so that's pretty smoking for that heavy beast of a car!
Saturday it was show time!
Before the news, how bout some pics! 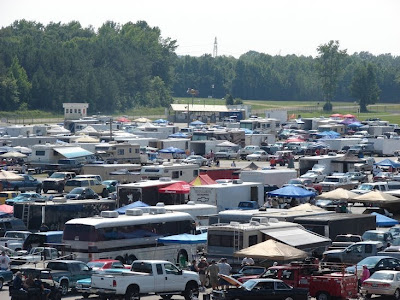 a small section of the pits! 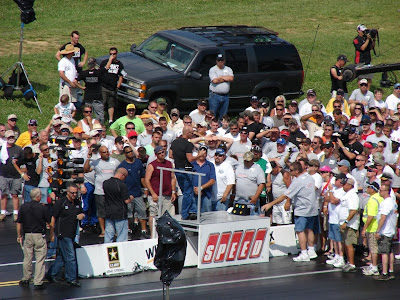 Rich Christiansen announcing the group that will have a chance at $10,000! 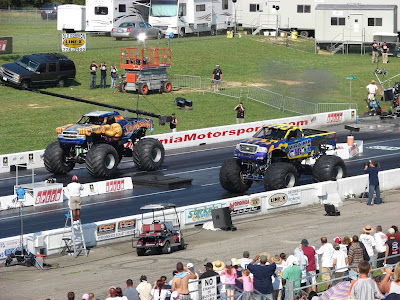 During soem downtime they entertained us with a little Monster truck drag racing!  LOL
Samson vs Virginia Giant!
Ok...Saturday went like this:
We did out first qualifying run, no problem!
Came time for the second qualifying run and while we were in the staging lanes the production crew and a few of the guys from the show were walking through and my motor caught their eye.
They came over and talked to us and were floored to find out that I had in fact built that motor!
They were so ticked by that(and the fact that it's driven almost everyday!) they decided to interview my father in law and me!  So I might be featured on their website in a "behind the scene" sorta story featurette!  OMG!!!
If I am, I'll post a link here then go run and hide in a hole forever! LOL
I was joking around with the head production dude(not the producer, the guy under him) about "threatening" (you know I'd never do that) a nearby motorhome to turn off his generator(it was making too much noise) and playfully tried to be intimidating and flexed and he went OMG, will you do that for us to tape!!!
So yes, I'm told that me flexing with a wrench in my hand (Rosie the Riveter style), then just hamming it up in general, will almost certainly make the show!  I'm so embarrassed! LOL
Why am I embarrassed?  Well, it was so hot I had pretty much no makeup on anymore, the heat + the ridiculous humidity took care of that pretty fast, and...AND...I forgot my razor, so my underarms weren't freshly shaven!  AAHHHH  I'm Italian people(dark hair!), this is terrible!  Day old shave is not a good thing!  The makeup is a huge issue for me since work was so stressful last week (I was in tears most of one day) that all that stress decided to show up on my face!  I look terrible!  AHHHH
They also followed my father-in-law halfway to the track when he was out cruisin early Saturday morning, so they taped that and it will be on the show too!
So while we didn't make any money, we did get noticed! Rob is ECSTATIC!!!

Ok, on the the nails or anything I'm not mortified about, LOL!
I had a great idea to do Asphalt looking nails with either a double yellow line, to look like a road.  Or to try to paint tire tread on one.  The yellow didn't look good and I forgot my nail art pen to do the tread, so you get bare asphalt!
I started with 1 coat of Wet & Wild "Black Creme" and added my franken "Rockstar" to it.  Rockstar is 70% gun metal glitter, with the remaining 25% a mix of silver and black glitter for depth.
Here is is shiney: 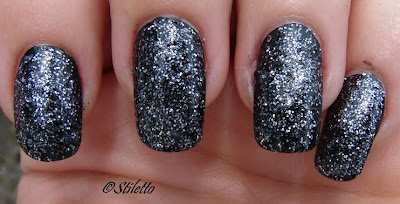 But Asphalt isn't glossy!  so MATTE to the rescue!

If you click to make them big you can see a MUCH bigger difference!
Tomorrow I have something to show you that is gonna shock you!
So be ready!
Hope you have a great day!
{{{HUGS}}}

What a great weekend!! I hate that it's been so nice and now the heat is ON! Love your matte asphalt nails - perfect for your weekend.

Looks like you had fun and the mani is awesome!

Gorgeous nails! And yay for getting noticed! Sounds like a wonderful weekend

It sounds like you had a lot of fun. =) I'm glad you got noticed, but then again...you have everything it takes to be noticed. ;)
Your nails truly look like asphalt. Good job, honey! :*

I'm sure all the things you are worried about won't even show up on camera.
Even so, I'm so sick of being fed "perfection". I *want* to see the real working deal...no make-up, heat flushed cheeks and sweat go with the territory. If anyone can rock it real, and look good doing it- you can!

Lol, poor dear...I'm sure it wasn't as bad in front of the camera as you thought!

AAahhhhhhhhh too funny for words!!! But I couldn't conceive how you could not be noticed -- you're a standout, girl, no doubt about that!