I am sure you read the title of the post and immediately thought "Again!?!?!"


I, for some reason, am stuck on neons, brights, and animal print right now.  It's kinda annoying cause I know it's gotta suck for ya'll!  So I'm tryin my best to drag myself outa this obsession.  But I make no promises!  LOL

Today's mani is a simple one, but a bright one!

1 coat of white polish.  I used Sally Hansen Insta Dri "Whirlwind White".  It's starting to get old and thick, even after a ton of thinner, so I gotta go get me some Wet and Wild White !

I broke out the Konad, and used Sally Hansen Insta-Dri in "Brisk Blue" with the animal print on plate M78. 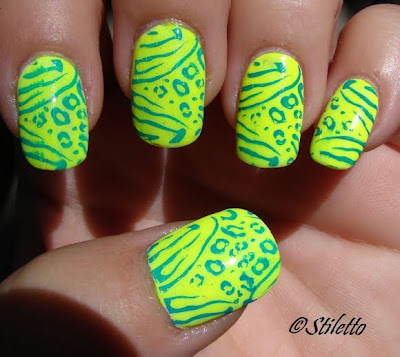 It's a shame, the blue doesn't show up right in the pics!
I'm sporting a sorta matching pedi right now too, using just the leopard print from m57, and these 2 polishes!
That's it for today guys!
Hope you have an awesome day!
{{{HUGS}}}

There's nothing hotter than neon in the summer.....except maybe neon animal print!!! I LOVE IT!!

I love it! I'm impressed that you do Konad on your toes, too--I could never been neat enough!

This looks so awesome and summery!

Who cares?! The brights are perfect for Summer. Keep em coming. :)

You're not the only one obsessed with neons and animal print ;) looks fun and happy!

It's different from your other manicures. Like this one. So nice and perfect for the summer. cute!